After a house is built, Liqi Pai 理氣派 or Compass School Feng Shui is concerned with how the building is engaging with the environment from a Gua Qi 卦氣 (Qi of the Trigrams) point of view and there are three ways to do this, according to the San Cai 三才 theory of Tian Qi, Di Qi and Ren Qi or the Three Abilities theory of Heaven Qi, Earth Qi and Human Qi:

For this reason, a compass method, like the Bazhai Mingjing 八宅明鏡 Eight Mansion School, would use the sitting direction, called the Fu Wei, to calculate the locations of the eight Wandering Qi through Yao line changes, the idea is to use the correlations of the compass readings to calculate how the house is “sitting on” or “riding” the Earth Qi.

Another system, like the Xuankong Sanyuan Feixing Pai 玄空三元飛星派 or Space-Time Three-Era Flying Star School, would use the facing direction to calculate the location of the flying stars, with its resultant sitting and facing star influencing health/relationship and wealth/officialdom respectively. The idea is to use the facing direction and its subsequent correlations of the eight Trigrams in the eight directions, to calculate how the house would face the Heaven Qi and whether a particular direction is auspicious or harmful (ji-xiong 吉凶) from a health and wealth perspective.

When a house is not yet built, Feng Shui is concerned with its location to the landscape, so in systems like the four San He Water Methods, they use the incoming and outgoing water in front of the site, as well as the direction of the Coming Dragon of the mountains behind as their reference point, to set up the 12 Life-Cycle （十二長生訣）, to calculate the auspicious and harmfulness of a location.

In Xuankong Dagua, the aim is match the siting of a house with its landscape (Shan Shui or Mountain and Water), so the direction of the “Coming Dragon” and “Going Water” of the land is matched with the Sitting and Facing of the house, according to the correlated numbers or Trigrams so the 4 numbers/trigram are either of the same, adding up to 5, 10 or 15 or they have Hetu pairing relationships to be ritually correct and auspicious.

Thus we can see the Compass Feng Shui Schools have different metrics to reflect the different way a house would engage its environment, and these are used as reference points for calculations, both before and after its construction, also internally and externally.

When this is understood, the compass methods may seem numerous and complicated, but they all have the same objective: how best to engage the Qi of the environment, so it can energize and nourish us in a meaningful and ritually correct way. Obviously, the best way would be for a house to be able to “ride”, to “face” and to “take in” the Qi of the environment in the most appropriate or auspicious way at the same time and this idea should be the core principles of any Compass school of Feng Shui. 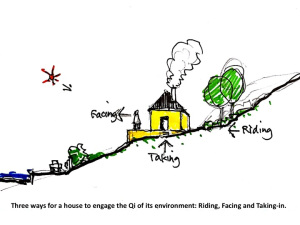