I think everyone is done with their new year resolution (I mean, you all have already fully and wholeheartedly abandon them). Its time to move into the usual next phase of your life … February Valentine day. For those that is attache, its the usual headache of what to buy while those single, who to buy for.

Lets take a peek into a few celebrity love live and see how can you make inform judgement toward your own love life. first some basic in analysing love using BaZi. The focus of analysis is the Day Pillar which represent your spouse palace. For Man, wife is represented by the Direct Wealth (DW) while woman, husband is represented by Direct Officer (DO).

Lets bring out the 2017 the singer of the best selling single in UK “Shape of You”, Mr Ed Sheeran. Not to be miss out, Ms Nina Nesbitt, Ms Athina Andrelos and most recent Ms Cherry Seaborn for being there for Mr Sheeran over the many Valentine day. 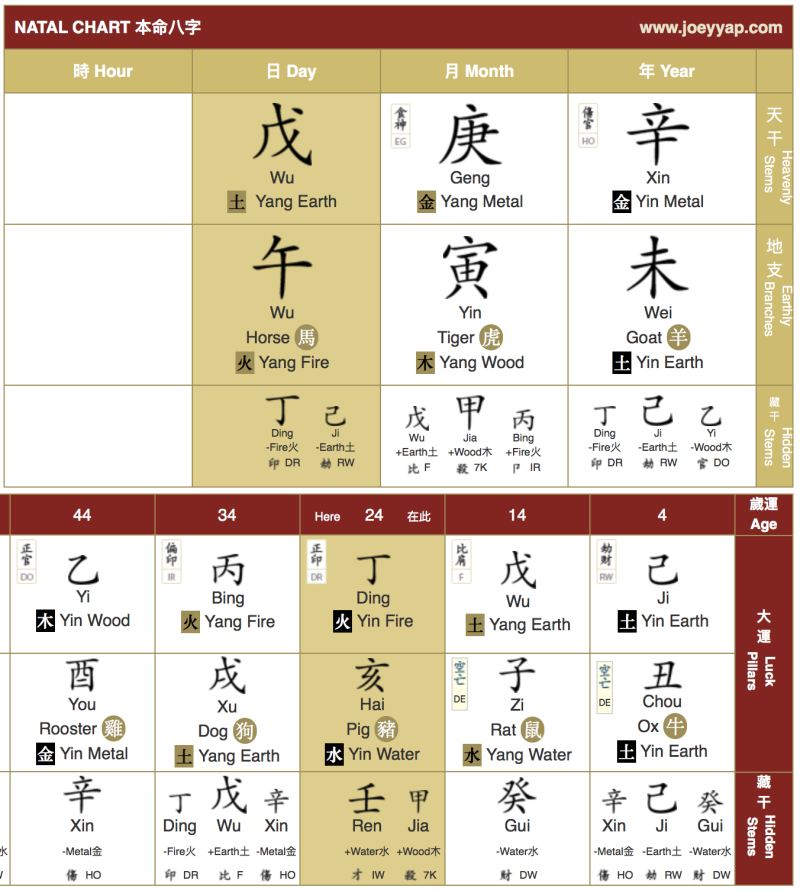 By taking a quick glance into his chart we can see that he is seated on a RobWealth star which represent his tendency to upgrade toward better partner as RW star push/counter DW (Wife) away. For ladies, if you are not really into the game of constant self upgrade, its best to steer away from guys that has RW in their spouse pillar.

Current luck pillar also see the appearance of IW which is the “girlfriend” star for man. This indicated that he is looking or at least driven to have a partner. The unfortunate part is that he lack permanency as his DW is in a state of Death&Emptiness. Looking forward the coming Luck Pillar does not show the appearance of any DW (Wife). While DW appear in the previous 2 luck pillar which indicate that the subject Wife has already appear long ago (childhood/high school friend)

Gui Water the Wife star (DW) appear in the year (Solar calendar change on 4 Feb, so Jan 2014 is still 2013 as far as Solar calendar is concern).

Cherry stepped into the picture in July 2015 which again see the appearance of Gui water  (DW) the Wife star.

So, Ed is going to get married in 2018 which is the year of Wu Xu. Yin-Wu-Xu (Tiger-Horse-Dog) form a three harmony with his spouse pillar which give an indication that he is ready to form a union.

Will this last? The coming Rat (Zi) year is on 2020 which is a clash of his spouse pillar. This usually signified a separation.  Ed is not the type which will settle down for a boring marriage life, he love to compare what he has against other and has want to be taken care of like how a mother taking care of their child. Its not an easy spouse pillar to be with.

How do you actually used this piece of information? Do to read your chart as your readiness to have a partner is not important. Read your potential partner chart and target those with spouse star appearing. It make the entire pursuit much easier as they are ready and driven toward a relationship. If you happen to be lucky enough to see a combine in the spouse palace, you can even seal the deal if you see fit.