The cinderella story has erupted with the entry of a commoner girl Meghan Markle into the royal family with the 5th inline Prince Henry. What would be the likely life as the new couple manoeuvre the royal battle ground and does Prince Henry stand a chance to ascend into greatness ? 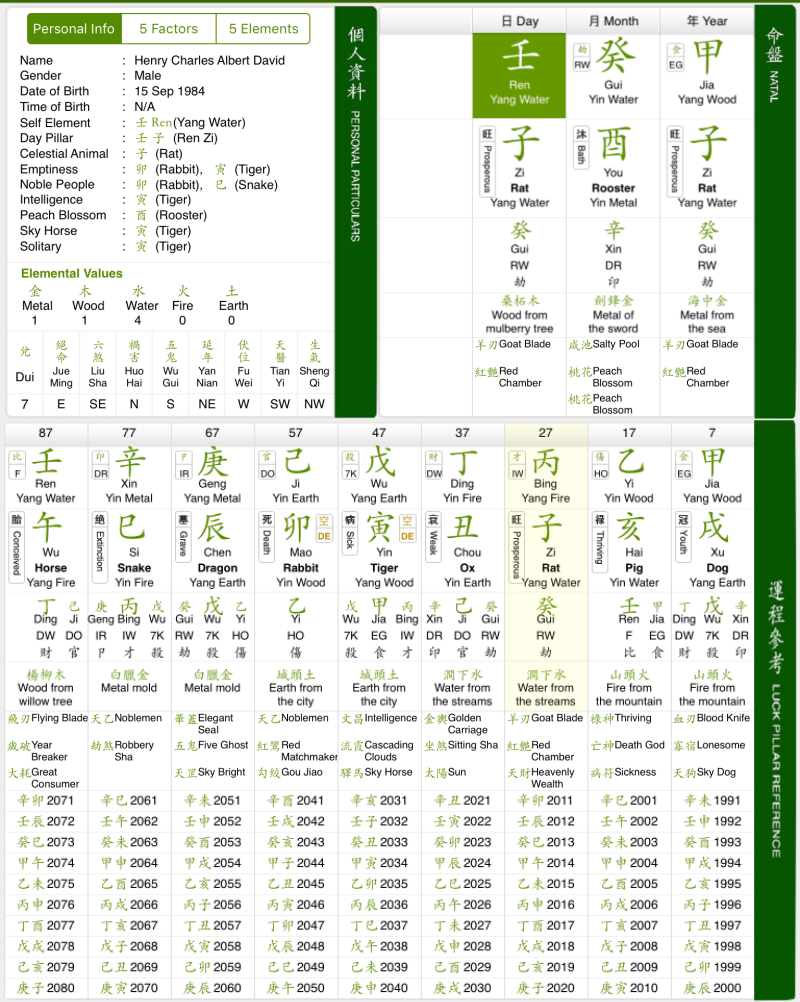 Simple enough of a peach blossom chart with a rather charming personality with a very strong networking ability. The chart is predominantly water which make him adaptive and sensitive to external environment especially emotional related matter. He has strong competitive nature which is why sport seems to be his thing, like the launch of Invictus Games in 2014 and his military involvement.

He is currently in his IW luck pillar and interestingly meet Meghan in 2016 which was a Bing Shen year where Bing is the Girlfriend star. Proceeding to 2107 Ding You making the Ding the appearance of wife star. Look like destiny wanted them to meet up. He is to seal the deal on 19 May 2018 which is a 7K year for Henry.

Note that Henry chart is swamp with RW star which is traditionally not a good star for relationship and he is in his RW luck pillar while 2019-2023 is also water related year where RW become strong and prominent. From Henry perspective, this union is more like a hostage situation and is done at knife point.

Silver lining is that the next luck pillar is where DW (wife) star become prominent while the RW star is curb by the DO star. Meghan should be able to do something about the disciplinary situation of Henry. The clash of Henry spouse palace come in 2026 where Bing Wu appear. Bing being the girlfriend star and Wu being the Wife star which set the stage for an eventful rude awakening.

Overall, I do not really see Henry being able to take the throne as RW natured is to cut corner and gain by doing as little as possible. Unless he play politic and basically underhand from behind the scene, very unlikely to gain confidence from the people. As for the marriage, Meghan is in the driver sit and I would say that Henry will go about his own business if Meghan do not quickly control his social circle.

We will take a peek at Meghan, William, Kate and Charles and see their position in this royal drama.