Note : Topic is rather advance and heavy.

A happy person should be a responsible person but yet we may be torn in between at times. A restaurant operated by an old couple wanted to cease their business but was unable to do so because they have a few employees that that work with them their entire life. If they closed the business down those staff would not have any place to work anymore.  They also have customer that are third generation coming to support their restaurant from time to time. Would you advise the couple to close down as it would give them freedom/happiness ?

Change a scenario. You have been working for this company for sometimes, this is the very company that took you in when no other company gave you the chance. Now you are a well reputed personal in your field of expertise. Head hunter are offering good package for you to move to a new company but your currently is in a difficult financial situation. You know you can turn the situation around by remaining. Would you just go and let the company sink/swim on its own ?

What if a young college couple made a vows to be together once they graduated? As times goes by you got into financial difficulty and may not be able to finish your course. The guy decide to go work part-time to support your fees and by doing so could not catch up with the studies. You graduated while he fail to graduate. Days went by where you progress up the corporate ladder while he get stuck in his career. Worse of all he is getting demotivated and destructive of his own life … should you still stay for love or let go and move on for greener patch ?

A person that has prominent wealth in their natal chart would of course choose the responsible path while those with better companion propensity would choose the happy path. Traditionally, a person is to sacrifice for the greater good and hence responsibility is value over happiness. the view of other first before you. If you look at a person luck pillar, during wealth luck they also have better propensity to finish anything they got into rather than turning to the easy road. While the opposite companion luck would set the person to a more chill mode and thinking that situation would straighten itself eventually. 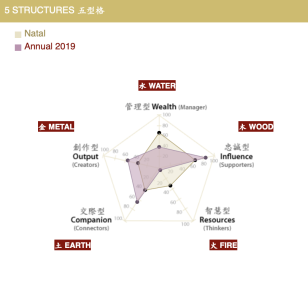 Where the below chart show a person that would be rather responsible with high wealth propensity. This year energy however is swing in favour of companion star while reducing the influence of wealth. (natal vs annual). If likely to be given a choice, this year happiness would be chosen.

The tough situation here that even if the chart is driven toward a choice, that does not means making the choice is right in the eye of society. The mitigating force between companion and wealth clash is always the output element which means looking at option (EG) and having a “talk” (HO) about it. This is where activity like consulting and counselling come into play. If you are in a situation where you are torn in between being a responsible party of society or being happy to your own cause, maybe its time to get a neutral third party to step in.

Get another view of the situation. For us in the metaphysic line, this is where we use predictive tool like QiMenDunJia or YiJing to tap into universal energy for some neutral unbiased opinion.